If you receive my email newsletter, you know I was working through something a few months ago. Something I wasn’t ready to reveal on the blog. It’s now been over two months since my grandfather passed away, and I’m ready to share his story with you.

I started writing it on the plane when he first got sick. He was awesome, and his life reflected that — so writing worked well as a coping mechanism. Then, over the next few months before his death, we worked on filling in the details. This story is what I read at his memorial service, and something I’ll keep forever.

If you’re wondering why I’m sharing it with you, the truth is: I’m not entirely sure. You may not be interested in the life story of a 91-year-old man — but I learned a lot from him, and thought maybe you could, too.

Whether you choose to read it or not, I’m just happy I can pay a public tribute to such a special person. Thanks for everything, grandpa; I love you. 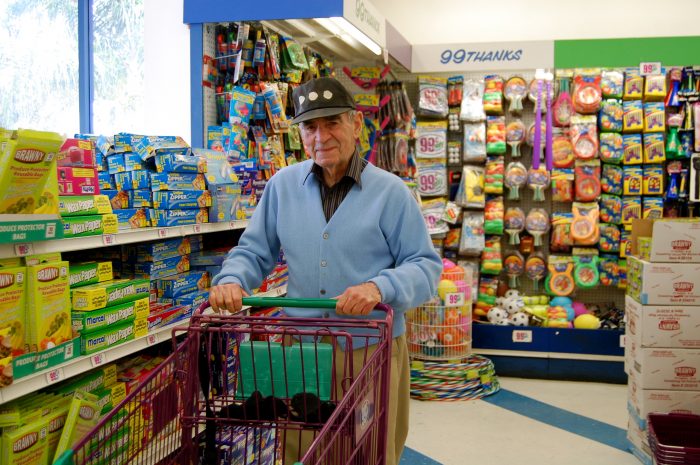 My grandfather loved to dance. You could say he danced his way through his entire life.

Born in Brooklyn in 1922, he grew up in a simple household with two hard-working parents and two older brothers named Herbert and Leo. His father Mordecai, a specialty suit tailor, had emigrated from Russia. His mother, Anna, was an American-born Russian who worked at the Jewish temple preparing meals.

As a young man, one of his favorite activities was sneaking into the local ballroom dance academy, where he’d charm the older ladies into teaching him how to dance. And he loved it. He knew that one day, when he was married, he and his wife would dance around the world together.

When the Second World War came, he was drafted and stationed in Camp Cook, California. He served in the signal corps. A peace-loving man, he hated the war. He couldn’t see the value in so many young people dying, and he found it “very hard to learn how to kill people you don’t know, just because the government says so.”

And despite his distaste for the war, something — or rather, someone — really wonderful did come out of it. One night, while hanging out at a USO in southern California, he saw her.

Her name was Leone. She was movie-star beautiful, smart as a whip, and most importantly, could dance like Ginger Rogers. He knew he wanted to be her Fred Astaire. They danced together that night, and the next — and two weeks later, he asked Lee to marry him. She protested at first, wondering why he would want to marry someone who was 28 when he was only 22.

Stubborn as he always was, my grandfather persisted, and my grandparents were married on May 20th, 1944. Though it would be their only marriage, it would not be their only wedding…

Exactly four months months later, they were selected to be married on a national radio show called “Bride and Groom.” (Nobody asked if they’d already had a wedding!) So, for a national audience, they said their vows again to Irving Berlin’s “Always.” Among other things, they received a diamond wedding band, dining room furniture set, and week-long honeymoon as prizes. 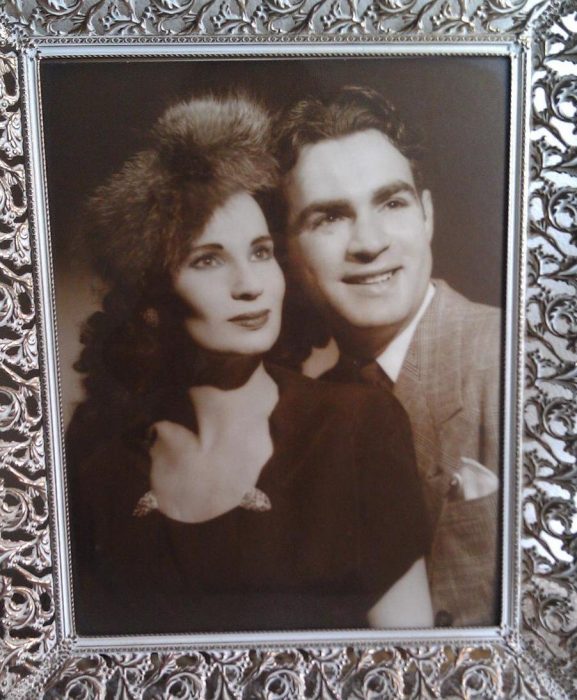 They couldn’t have been happier, and they enjoyed a few years of just being married. My grandpa always told me to do the same — to wait a year or two before having kids. When I asked him why, he explained: “That way, you can just focus on each other. You don’t have anything else to worry about. If you want to go on a vacation, you go. If you want to have sex in the afternoon, you do!”

At the time his sons were born, my grandpa was working as a financial controller for a meat company. He was also doing “storybook wedding” photography on the side. He loved photographing weddings, because he and my grandmother would often get invited to stay for the receptions — which meant they could dance together all night.

And dancing together was their favorite thing in the world. They traveled all over — from Costa Rica to Colombia to Europe — dancing on cruise ships and in restaurants, much to the delight of the other guests. They were so good, in fact, that people often asked them if they were professionals! Their favorite place was the Spanish island of Mallorca, though the space that got the most use was probably their living room. Even I have childhood memories of sitting on the floor and watching them twirl around.

As if they weren’t busy enough, my grandparents were also heavily involved in real estate. Most often, they would purchase a condo, move in for a year, fix it up, then sell it at a profit. They lived in 17 different condos over the years. My grandpa was proud of his success, often asking, “Can you believe I did so well without ever going to college?”

Once their sons had grown, my grandparents stayed busy with real estate investing, walking, going to the horse races, and grocery shopping. (They’d visit several stores to get the best price on bananas!)

But when she was in her 70s, my grandmother started to lose her health. She had breast cancer twice, and her glaucoma became so bad that she could barely see. My grandpa took care of her for many years. It was extremely difficult to see her suffer so much, but he stayed by her side through it all. 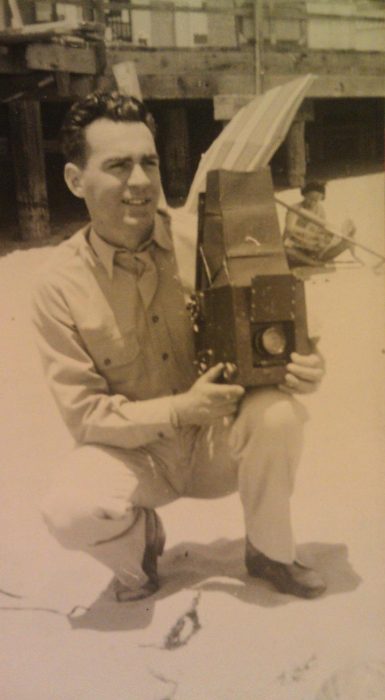 When I asked my grandpa what had made their marriage so strong, he told me it was simple. That if you want a good marriage, you need three things: same views on money, common interests, and good sex. It must be good advice, because they were married for more than 60 years.

Shortly after they moved to a new retirement community, my grandmother passed away in 2006. The community was called Casa de Manana, and it was a beautiful location on the beach in La Jolla, California. He had a large two-bedroom condo that he loved.

Every day, he’d go down to the dining room to eat breakfast, and then would go on an hour-long walk. He always said that breakfast was the most important meal of the day, and that’s when he’d eat the most. He ate little meat and no desserts, and he attributed his health (and the fact he was on no prescription medication at age 91) to his diet and daily walks.

His favorite store was the 99 cents store, and he’d get excited to go anytime I’d visit. He was a big sports fan who had a love-hate relationship with the San Diego Chargers, and he made sure to catch all the games on TV. His other favorite shows were The Big Bang Theory and Project Runway — he loved the beautiful dresses (and the beautiful women wearing them). He was always interested in fashion, once saying about his unique choice of neckwear: “Sometimes, you just want to wear a bolo tie, you know?” (I didn’t, but I appreciated the sentiment.)

All through his life, my grandpa was extremely friendly and outgoing. He could make friends with anyone. He’d walk into the bank and come out an hour later with three new pals. That’s just the way he was.

Though he enjoyed meeting everyone at Casa de Manana, he definitely preferred the ladies. As he said, “You know; I have no interest in guys, really. I can say ‘Hi, how are you?’ but that’s about it. We have nothing to talk about. I much prefer the company of women.”

And the ladies preferred him right back. He’d always notice when they styled their hair differently or were wearing a pretty brooch. He’d let them know how nice they looked, and even if nothing had changed, he’d say, “You look beautiful today.” They LOVED it — and him.

He was also kind to the staff at Casa de Manana, always encouraging the young men and women to become models or try out for “the pictures.” Every week, he’d carefully clip coupons from the newspaper to give to the people with families.

Though he was from another time, he tried his best to respect everyone. Thanksgiving was his favorite holiday because, “It doesn’t matter what religion you are. Jewish, Muslim, Christian… everyone can celebrate.”

He always encouraged me to follow my dreams of traveling and writing, and he hoped I’d write a book some day. He was proud of my adventures, and the fact that I’d figured out how to make a living off them.

Whenever I’d see him, he’d ask me two questions: whether I was getting married, and whether I was going back to school. Though I have not yet fulfilled either of those wishes, by writing this story, I am fulfilling another. He wanted someone to write about his life, so that “people would know how wonderful it was.”

Besides, I think he was really just asking whether I was happy. And because of his love, and that of my family and friends, I am.

I never realized how similar I was to my grandpa, but now I know he passed a lot of himself on to me. Our love of photography. Our frugality. Our passion for dancing. Our stubbornness. Our positivity. Our desire to be friends with everyone.

My grandpa was a wonderful man. I hope that, someday, I’ll be as good of a spouse, parent, and grandparent as he was. Until then, I’ll keep living and loving to the fullest — just like he taught me to do.

Thanks for reading this little piece of my heart. Have you learned any important lessons from your grandparents?

14 Comments on A Life Well-Lived: Inspiration From My Grandpa