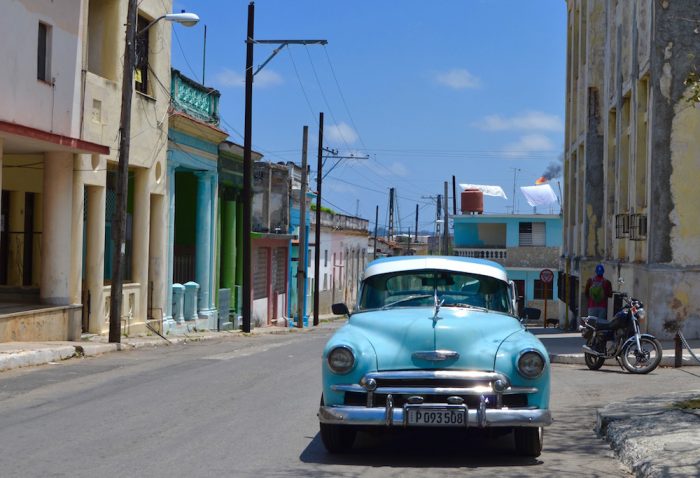 People are always asking me about Cuba.

Nearly a year ago, I spent one week in Cuba, and it seems like interest in traveling there has only heated up. Especially for Americans.

So, honesty time: I didn’t love Cuba like I thought I would. That being said, I’m glad I went. And would recommend it to anyone who wants to get a deeper glimpse into a totally foreign way of life.

Cuba was different than any other place I’ve traveled to. In some ways good; in some ways not so good.

I’m well aware I could never understand a country, place, or people in a week, so please note these are my personal observations — and nothing more.

First off, I had many beautiful moments in Cuba. My guides and hosts were kind. The mountains around Viñales were gorgeous. The salsa dancing was a blast. The food was some of the best I’ve ever eaten.

I also really enjoyed talking to my guides and learning about their lives. I asked a lot of questions, and in turn, learned a lot. But it wasn’t the eager, excited absorption of culture I’ve experienced in other places.

It was a sad unfolding. Of struggle, of pain, of longing.

I learned that doctors only earn $67 a month. That people can’t live off the food rations they receive from the government.

That people are incredibly jealous of their family in the United States. One guy said he’d tried to escape twice, but both times something had come up. And now he’s married with a child, and can’t leave his family behind.

Again, I’m no economist — and I only spent a week in the country — but the poverty felt more desperate in Cuba than elsewhere.

Where people rushed to act friendly, to “help” you, only so they could ask for money a few minutes later.

Every transaction I had with a Cuban person was strictly for financial purposes. I never managed to have a conversation with someone I wasn’t paying, or who didn’t hope I would pay them. I barely managed to get smiles out of most people.

Of course, I understand why that was the case — and have experienced it in other places, as well — but it just seemed so much more stark in Cuba.

And I guess what irked me is, that unlike in other destinations, many travelers seem to find their poverty quaint.

The crumbling buildings, the old cars, the parts of Cuba that are “stuck in time,” that we travel there to see — they quickly became sad to me.

Because it’s not only things in Cuba that are stuck in time; it’s people, too.

And the people I met don’t want to be stuck. They want the opportunity to use a computer and join Facebook and get fat from McDonald’s like the rest of us.

Maybe it’s just the people I met. I know many people who loved their time in Cuba, and who say their guides and hosts were delighted to be living there. Personally, I didn’t have that experience, but I hope it’s true. I hope I’m wrong.

Because when I think of Cuba, I can’t help but think of a conversation with my horseback riding guide. He seemed to earn a decent living (since he worked with tourists, rather than for the government), and to really love horses. I thought he was one of the happiest Cubans I’d encountered in my travels.

Yet, when I asked him if he wished things would change, he simply looked at me and asked: “What do you think?”

Why You Should Travel to Cuba

Complex feelings aside, you should still go to Cuba. (Just be sure to bring a lot of patience — traveling in this country isn’t always a walk in the park!)

First off, because it’s good to explore somewhere so vastly different. To learn about an economy that’s the complete opposite of what you’re used to. To get uncomfortable, because it forces you to assess what you believe in.

And lastly, because the Cuban people need you. Foreign tourists are one of the only ways Cubans can earn a decent income. The people who work with visitors are far wealthier than those who work in regular government jobs.

So go, enjoy — and ask lots of questions.

What to Know Before Traveling to Cuba

I’m not going to go into the details of how to travel in/to Cuba (here’s a great Cuba guide from my friend Shannon, and another good one from Goats on the Road), but I will note a few things I haven’t experienced in other countries:

One Week in Cuba: Itinerary, Budget, and Recommendations

Since I couldn’t get online during my trip, the Lonely Planet Cuba was basically my bible.

I avoided government-run hotels and opted to stay at casas particulares, which are basically homestays. I highly recommend this option over hotels or Airbnbs, because you get to chat with Cuban families — and will undoubtedly have the best food of your entire trip.

I made my bookings ahead of time through CubAccommodation.com, which I found to be a reliable and responsive service for booking casas particulares in Cuba.

For a one-week Cuba itinerary, we spent four nights in Viñales and three nights in Havana. Because I’d rather be in the country than the city, this worked out perfectly. After we arrived in Havana, our casa booked a shared taxi for us to Viñales; it took four hours and cost $20 per person.

If you need some beach time, we also did a daytrip from Viñales to Cayo Levisa. It was a beautiful beach, but I would definitely NOT recommend the snorkeling (because of seasickness, poor equipment, and awful organization) or the cheese sandwich (maybe the worst thing I’ve ever eaten, and an item that certainly did not help with the seasickness).

As for our one-week Cuba budget for two people, we spent about $1,200 US (although we brought down about $1,500 in cash just to be safe). That was eating all of our meals at restaurants (or our casas), drinking many mojitos, doing an activity or tour nearly every day, and spending about $30/night on hotels.

Now for the Cuba recommendations…

What to Do and Eat in Viñales

Go salsa dancing at Centro Cultural Polo Montanez: This bumping bar is right in the heart of town, and was a perfect place to try out our salsa skills. Live music and a big dance floor that’s not at all intimidating.

Take a horseback tour: Great way to get out into nature and see some of the farms that supply Cuba’s famous tobacco and coffee. Any hotel can book a tour for you, so don’t bother booking ahead of time. And don’t buy cigars in Havana; here, you’ll be able to buy them directly from the farm!

Rent a moped: Great way to get off the beaten path — just bring your driver’s license! (Tyler didn’t have his, so I had to rent it in my name, then pretend to drive it until we were out of sight of the rental place. I ran into a dumpster, etc, etc; it was NOT pretty.) When you’re tooling around, head to Hotel Los Jazmines for some nice views.

Finca Agroecologica El Paraiso: Whatever you do, don’t miss lunch at this organic farm. They offer a massive spread of fruits, vegetables, meat, bread, soup — more than you could ever eat — for around $10 a person.

Where to Stay in Viñales

Casa Carmen y Daniel ($25/night): Omg if we could’ve stayed here two weeks we probably would’ve. Not because the room was anything to write home about, but because of the food. It was probably some of the best food I’ve ever eaten anywhere. You’ll notice I didn’t mention many restaurants in Viñales; that’s because we ate as much as possible of Daniel’s incredible cooking. You absolutely must ask him for his langostino (lobster) — and then smuggle some out of the country to send to me, because I still dream about it on the regs.

What to Do in Havana

Walk from Old Town to the National Hotel along the Malecón: Then grab a mojito and watch the sun set over the water!

Take the ferry to Regla, then wander: This was a fun and non-touristy experience. Highly recommended.

stand in line at La Fábrica de Arte Cubano: Huge warehouse dance club thing. When we tried to go, the line was WAY too long. We waited for 30 minutes without moving, then decided to bail. But I’ve heard it’s awesome.

Also dance at the Jardines del 1830: Where we ended up when the line at the other place was too long. Touristy — but fun — spot to drink and dance.

Where to Eat in Havana

Los Nardos: The best meal we had in Havana. Romantic interior with mind-blowing paella for under $10.

Paladar Dona Eutimia: Heard great things about this little joint, but didn’t make a reservation — so it was full.

La Guarida: THE restaurant to eat at in Havana. Ask your host to make a reservation as soon as you get there. (We missed out because we are slackers and, like the place above, it was full.)

Where to Stay in Havana

Casa Daniel y Fina ($30/night): This casa was just okay. It’s in Centro Habana, which is certainly grittier than Old Havana. Although that’s what I wanted, almost everything we wanted to see was in Old Havana, so I’d probably recommend just staying there — and walking to Centro Habana if you’d like a less-touristy experience.

Have you been to Cuba? Or are you planning a trip there?

27 Comments on My Complicated Feelings About Cuba (Plus Travel Tips)