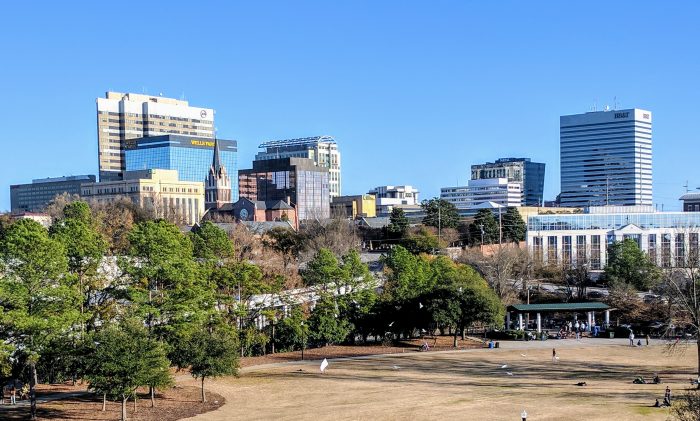 On New Year’s Eve, I moved to another planet.

One where people are bizarrely nice.

Where stores are closed on Sundays.

Where the accents make me blush.

Where directions include “just look for the giant Jesus statue.”

Where, in the grocery store, they walk you to whatever you’re looking for — instead of flinging a hand in the general direction without making eye contact — and then thank you for shopping with them. And then stare at your reusable bags, unsure what purpose they serve.

Yes, y’all, I’ve moved to the south. To a state that proudly displays its geography in its name: South Carolina.

I never thought I’d say those words, but then again, life never leads you down the path you expect.

After the past year, during which Tyler and I lived in Mexico, Guatemala, Maine, and NYC, neither of us had South Carolina on the list. In fact, we’d booked tickets to India, planning to be there for an undetermined amount of time.

But, due to family health reasons, we decided to stay close.

Tyler got a web developer job in Columbia — which, fun fact, is the state capital — at the University of South Carolina (the other USC). I, once again, quit a full-time remote writing job to return to freelancing. (Need some content? Hire me!)

In a whirlwind few weeks, we canceled our India tickets, signed a six-month lease (hello, commitment!), spent $100 on furniture from Craigslist and Goodwill, and got a houseplant.

Even more revolutionary: we got one of those big laundry detergent jugs with the spout because, for the first time in a while, we knew we’d be somewhere long enough to use it up.

I bought a membership to a yoga studio and a coworking space.

I started volunteering at a homeless center and sneaking into lectures at the university.

I started making candles, and might even sell them as a little side business soon. (Want your chance at winning one? Take this survey.)

I’ve been cooking up a storm, since I have all my spices and pans again, and since we subjected ourselves to six weeks of bougie masochism known as the Whole30.

I’ve also been working on a huge project — an EBOOK!!! — that will be released on February 15. Subscribe to my newsletter to get a head’s up when it comes out.

Most shocking, perhaps, I have no flights booked. (Well, just one: heading to Portugal in March if you have any suggestions!) Normally that would make me feel trapped or panicked… but I am loving it.

And this time, the decision was made for me. I’m not saying we’ll stay past our lease, or that we’ll live in Columbia with a “u” forever.

All I’m saying is I’ve been forced to take a breath, and to my surprise, it feels pretty good.

Do you have those same poles within you? How do you balance them?