We crunched up the snowy path. It was freezing outside; we could see our breath and barely feel our toes. But we knew something magical awaited us at the top, so we kept going.

Then, we saw one. It darted across our path to go prostrate itself on a heating pipe. It was small, greyish brown, and utterly adorable.

At last, I had arrived at the home of the Japanese snow monkeys. 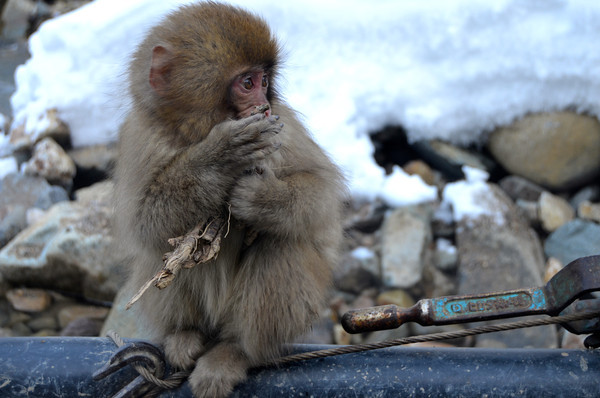 When I was 10 years old, I remember peeling through a National Geographic and seeing a photo of a monkey sitting in what appeared to be a hot tub. Ever since then, I dreamed of seeing the snow monkeys in real life.

Earlier this year, I made that dream come true when I visited Jigokudani Monkey Park in Yamanouchi Prefecture, Japan. When we reached the hot springs and monkeys were scampering all around us, I seriously felt like I was going to throw up from excitement.

Instead, I just stood in the middle of the path (blocking everyone’s way) and took it all in. It was every bit as amazing as I’d imagined it would be.

Here’s a video to prove it:

There’s not much else to say other than it’s an incredible experience. The wild monkeys (Japanese Macaques) come down daily from the mountains to bathe in the natural hot springs. Since they’re accustomed to tourists, you can get really close to them to observe and take photographs. They are very social animals, which makes them an absolute joy to watch — especially the babies!

If you’re considering visiting the snow monkeys, read on for more photos, as well as answers to common questions like how to get there and where to eat. 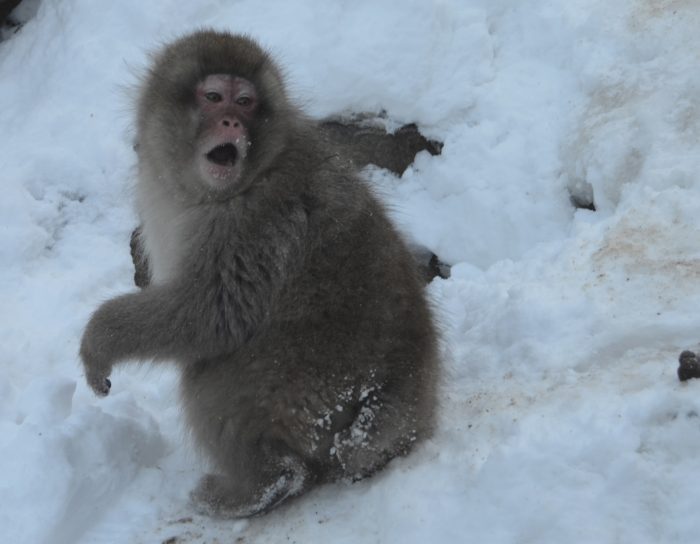 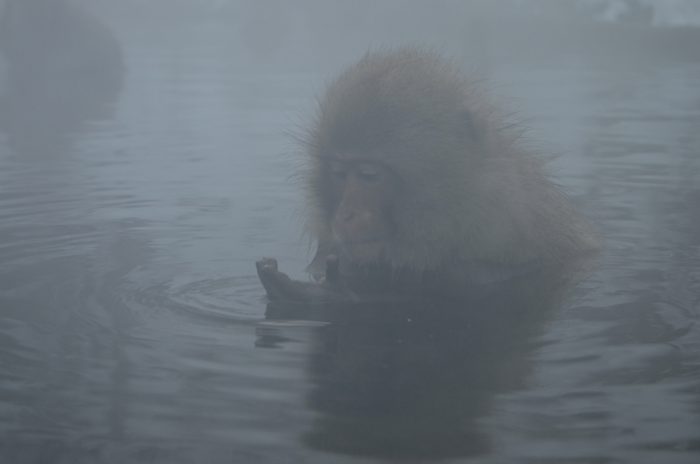 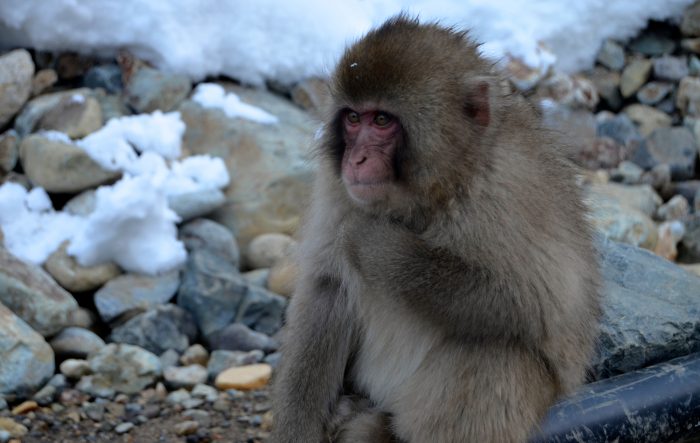 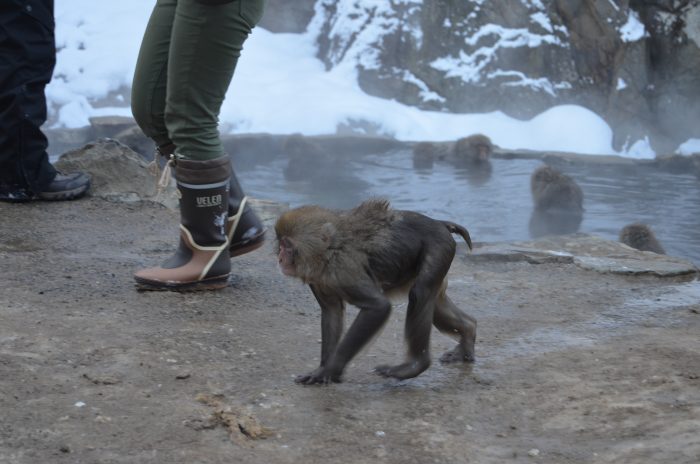 Where are the snow monkeys?

The closest major city is Nagano. If you fly into Tokyo, you can reserve a hotel near Narita Airport and take the train the next morning. From Tokyo, it takes 100 minutes and costs $80. Then, you’ll take a train from Nagano to Yudanaka Station, which takes about an hour and costs $12.

How do you see the snow monkeys?

If you stay in Yudanaka, find a hotel that offers a free shuttle to the trailhead. From there, it’s a 15-minute hike up to the entrance of the park. If your hotel offers boots, take ’em. The trail is cold and snowy, and you’ll definitely get cold.

There’s a very reasonable entry fee of $5, and you can stay as long as you like. You can warm up in the visitor’s center with a cup of hot chocolate on your way up or back. We spent about an hour and a half watching the monkeys. The park is open year round, though it is snowiest (and therefore, most picturesque) in the winter months of December through February. 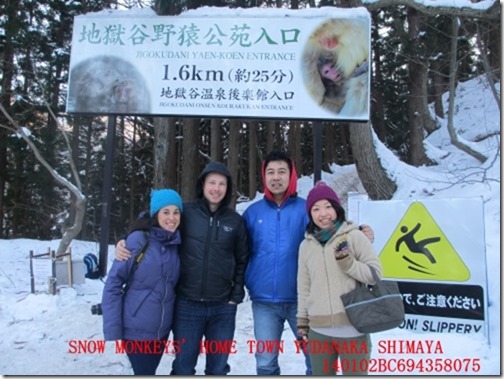 What hotels are near the snow monkeys?

It’s honestly kind of confusing. Yamanouchi is the prefecture in which the monkeys are located, and you’ll see that name a lot. But the town we stayed in was called Yudanaka, which is only a few minutes drive from the park.

We stayed at the Shimaya Ryokan, which is centrally located in Yudanaka and offers free shuttle service to and from the park. For a room for four people (traditional Japanese style), it cost $188. It had its own onsens (both indoor and outdoor); the outdoor onsen was particularly beautiful, and you could reserve it for groups or couples. The ryokan was clean and offered free wifi, and is within easy walking distance of the train station and restaurants. They serve breakfast for $8/person.

There is lodging in the park, but it’s very expensive. I don’t think it’s worth it to stay there, since many of the hotels in Yudanaka offer free shuttles to and from the park, and there’s also a public bus. 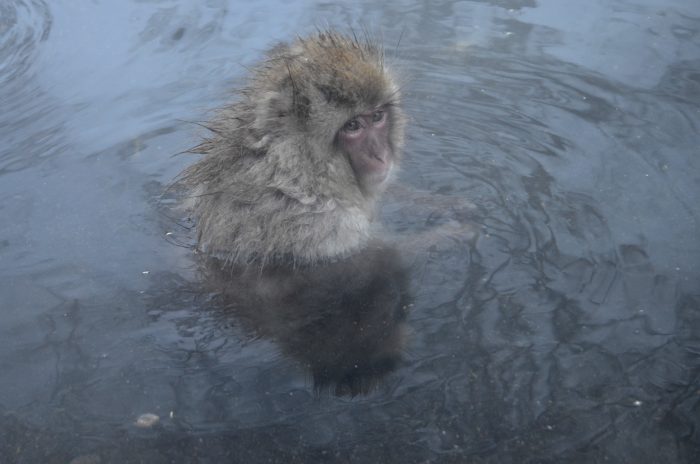 What food and activities are near the snow monkeys?

Close to the Shimaya Ryokan, there are a handful of restaurants, including one izukaya. One place had the best soba noodles I’ve ever tried. And not just me — all four people in my party agreed (two of whom were Japanese, and one of whom had lived in Japan for a year!).

There is skiing in the area, though if you’re going to go, you might as well take the trip north to ski in Hokkaido. There are also several onsen towns in the area, which means there’s an abundance of hot springs to visit if you want to do like the monkeys!

This post was brought to you by the Radisson Narita Hotel. Opinions are totes my own.

4 Comments on Meet the Adorable Snow Monkeys of Japan