But if you’re like me, and want to mix a few activities in there, here’s how I spent my week in Lahaina (on the Hawaiian island of Maui).

Learn from what I did right (and wrong) by reading reviews of the activities, restaurants, bars, and accommodations I tried.

Things to Do in Lahaina

For first time visitors to Hawaii, this is one of those things you probably want to check off your list. I know I sure did. I read great things about the Drums of the Pacific Luau at the Hyatt Regency. 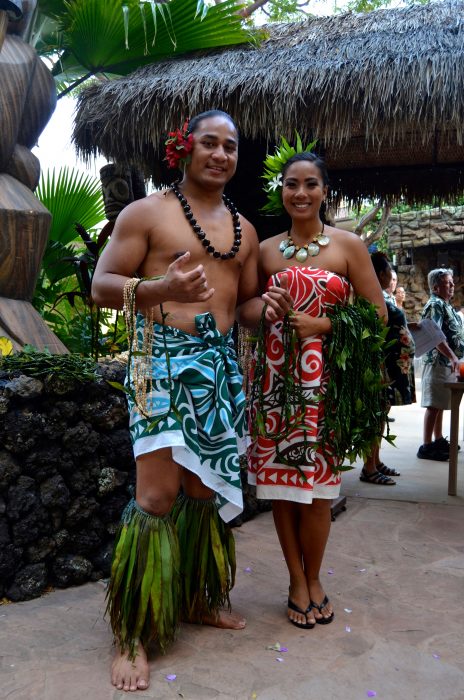 First off, free food and unlimited drinks come with your ticket. Say what??? The food was yummy, and it was the only time on the trip that I ate Hawaiian fare. The drinks were clearly great (nothing beats free!), and all of the staff were super friendly. 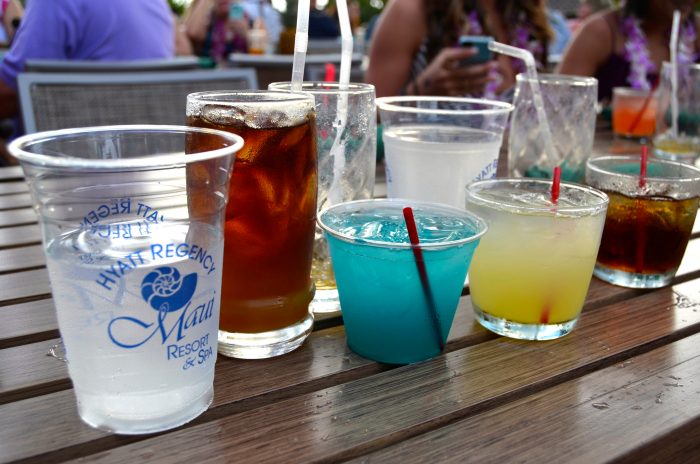 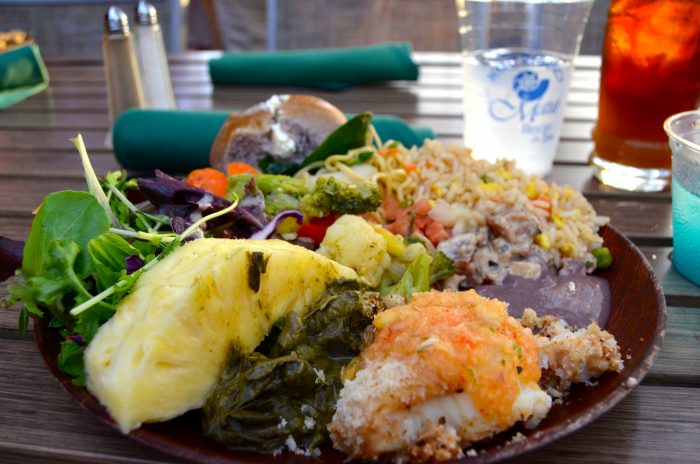 The show was really fun. Hula dancing is truly beautiful, and the music is lovely. They also showed how they do a traditional pig roast, which despite not being my favorite part, was still interesting. The most exciting part was definitely the fire dancers at the end. HOT! 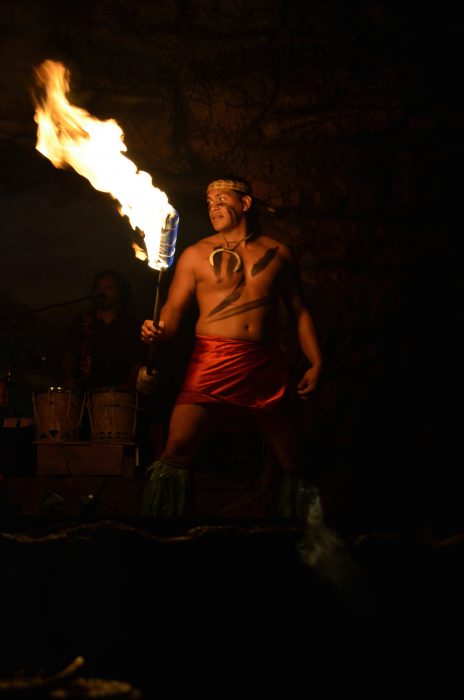 We were treated to VIP tickets, which were pretty cool. You get to sit right in front and have first dibs on the buffet. If you have the cash to spend, it’s probably worth it. (You also get a special lei… woo!)

Normal admission is $95/person, and VIP is $145/person. Shows are nightly at 5 pm, and they last around three hours. Though it sounds expensive, you have to remember that dinner in Lahaina for two can easily cost over $100. When you factor in free food, unlimited booze, and unique cultural entertainment, the Drums of the Pacific Luau is well worth the cost for a first time visitor to the islands.

Note: It’s several miles north of Lahaina. If you are going to drink at the luau (duh!), then you’ll want to take the public bus to Whaler’s Village and arrange for a taxi back (around $20).

You can’t visit Lahaina and not get on a boat. It’d be a travesty. And if you’re on a boat, it might as well be one of Trilogy Excursion’s beautiful sailboats. 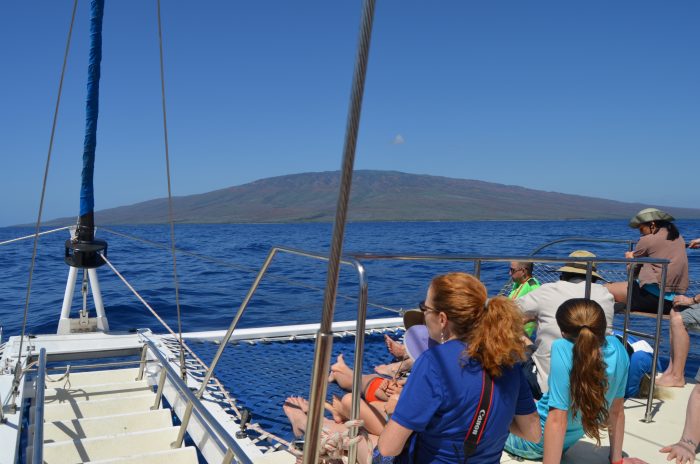 We took the “Discover Lanai” excursion, which was an all-day sailing trip to the neighboring island of Lanai. To start the trip off, we received hot cinnamon rolls, coffee, and fruit. Then it was a gorgeous two-hour ride to Lanai. Once we arrived, we had the option of going on a city tour or walking to the beach.

We opted for the beach, which was beautiful. We had planned on going on the snorkeling tour that was included, but since it was the day after the wedding, we were too hungover. I’m bummed we missed out, though, since a local later told us that it was some of the best snorkeling in Hawaii. Next time. 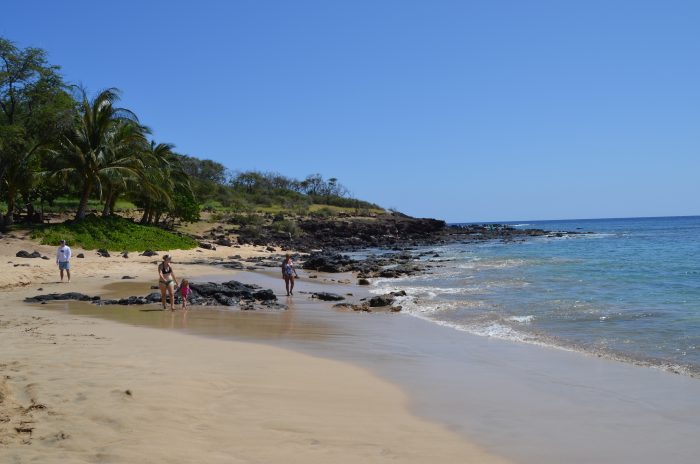 After a few hours on the beach, we walked back to a big gazebo, where we were fed a big lunch — and Dramamine. Good thing, because the trip back was a lot rougher. As an added perk, they offered us mai tais and beer on the way back!

The cost of the eight-hour trip is $177/person, and it includes all your food, drinks, and activities (except SNUBA). Check the Trilogy website for departure schedules.

The “Discover Lanai” trip was well done, but I don’t think we were the clientele it was made for. It is perfect for families or older couples, but I didn’t see a whole lot of young people on the trip. If you want to go sailing, go to Lanai, and go snorkeling at a unique spot, this is an amazing way to do it. But think about whether you want to be on a boat for four hours to go to a beach, when there are so many beautiful ones on Maui. 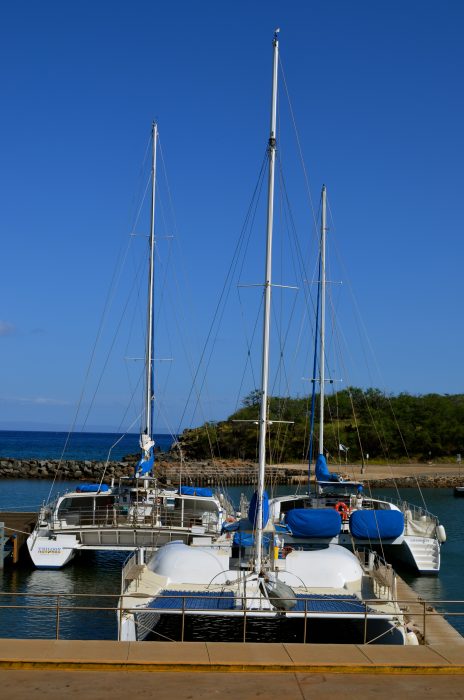 That being said, Trilogy is clearly a wonderful company. They did everything right; it was our fault for not thinking about what we wanted out of the trip. The equipment and staff were great, and the trip was really well organized with an emphasis on excellent customer service.

If sailing to Lanai is on your bucket list, by all means, choose the “Discover Lanai” tour. But if you want to do something a little less intense, consider one of Trilogy’s other trips — I’m sure they’ll rock it!

I’m so glad I chose Banyan Tree Divers to go scuba diving with in Lahaina. They’re a small company (just two people!) that is only about a year old. They’re growing quickly, however, and it’s easy to see why.

Kevin, one of the owners, and our guide for the dive, was super friendly and helpful in all of my interactions with him. Before the dive, he took the time to really get to know us and our diving experience. He walked us to the dive site and explained the dive plan in detail. He reviewed the underwater signals and gear, and when we entered the water, we even did some basic mask and breathing exercises. 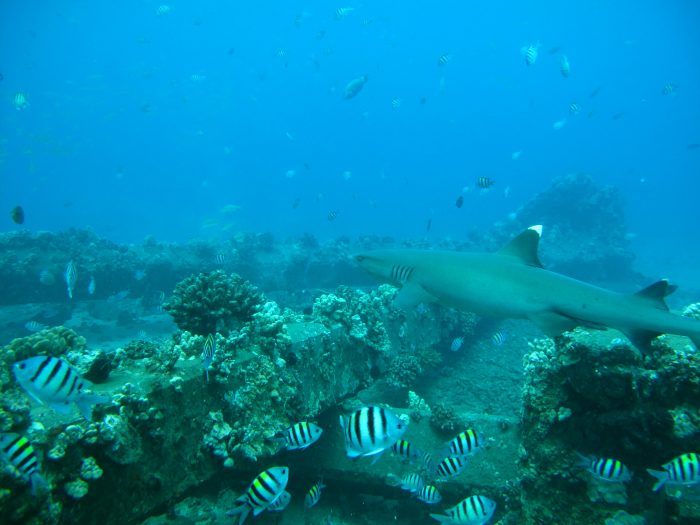 The dive itself was awesome. It was a shore dive off of the old Mala Pier, which crumbled into the ocean and created a wonderful habitat for fish. We were the only ones diving in the area, so we had the place to ourselves. We saw beautiful coral, sharks, schools of fish, and several turtles. There were also some cool shelves and tunnels that we got to dive through and around. Visibility was good, and since it was shallow, we got to stay under for 50 minutes.

All in all, I can’t recommend Banyan Tree Divers highly enough. I am sometimes a nervous diver, so the time that Kevin took beforehand to make everyone feel comfortable was SO helpful. I’ve never had a dive outfit do that before — it’s obvious he truly cares about his customers.

Not only will Kevin take great care of you, he’ll also take great photos of your dive (as evidenced here). A guided dive costs $79.95 and can be arranged according to your schedule. If you’re diving in Lahaina, be sure to give them a call! 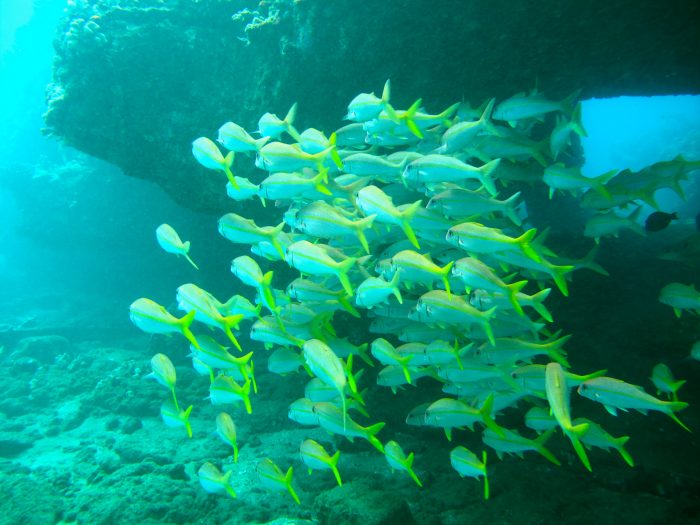 This was the only activity that I wouldn’t do again if I returned to Lahaina. We went out on a boat with four other customers, a skipper, and a deckhand. We trolled for big pelagic fish like blue marlin, tuna, and mahi mahi.

To go on a four-hour trip with Start Me Up fishing, the cost was $139/person, which is reasonable, especially compared to sportfishing in Alaska. (Fishing licenses aren’t required in Hawaii — can you believe that?!)

But, as with most things, you get what you pay for.

Fishing is fishing (not catching), and I understand that, but neither our skipper or deckhand did anything to make the trip interesting. On other charters, if the fishing is slow, the skippers tell stories, teach you about the area, or show you how to use the gear. These guys just sat around and complained, and they never once checked our gear or changed bait. 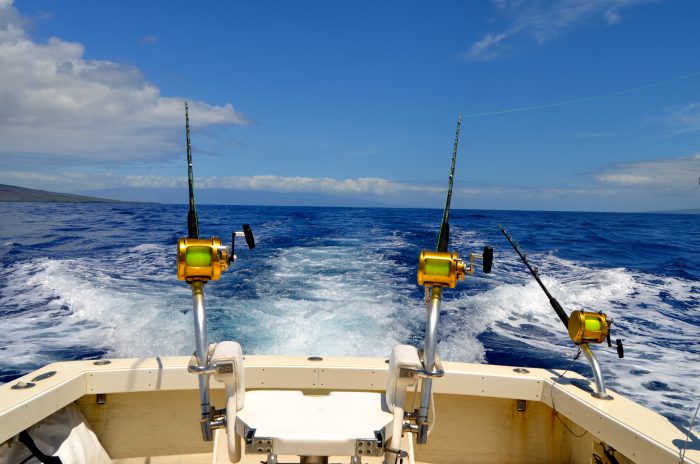 No one got a single bite.

Also not the company’s fault, but I didn’t particularly like this type of trolling. We had to go so fast (to keep up with the species we were fishing for) that it wasn’t relaxing. It was just four hours speeding in circles around the ocean. The highlight was seeing some whales, but we went by them so fast that we couldn’t really enjoy it.

Perhaps it would’ve been better with another company, but I probably wouldn’t go sportfishing in Lahaina again.

I love whales. Like really love them. So even though I get to see them often in Alaska, I wanted to try and spot them down here in Hawaii. (It could even be the same ones, since they migrate up to AK for the summer.)

I chose to go with Ultimate Whale Watch, because their fleet is comprised of small boats. On our trip, there were only six clients, plus the captain and naturalist. What a treat! 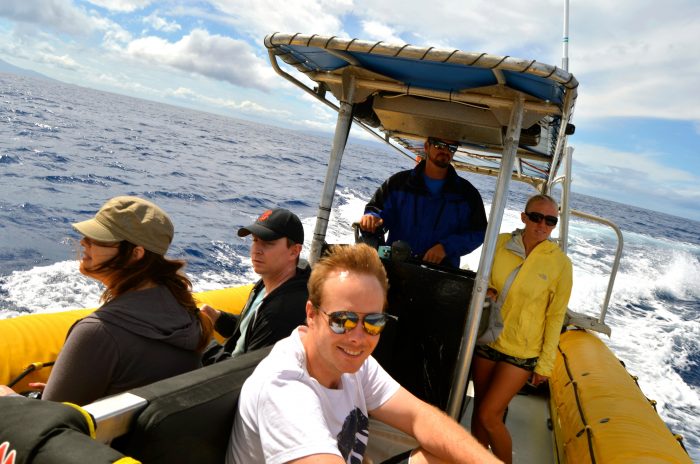 The whale activity was pretty minimal, since the season is coming to a close, but Captain Ryan and his first mate, Lindsay, did an excellent job talking about the area and the whales that we did see. You can’t control nature, but they made it fun and educational for everybody.

The HUGE highlight of our trip came in the form of spinner dolphins. Hundreds of them. They literally surrounded the boat, spinning into the air and playing around us. It was amazing.

All in all, my experience with this company was fantastic. The employees are engaging, and their small boats set them apart from all the other companies. The two-hour tour costs $50. If you’re going on a whale watch in Lahaina, I would undoubtedly go on one with Ultimate Whale Watch.

Bars and Restaurants in Lahaina

Betty’s Beach Cafe: AWESOME spot for happy hour with beautiful ocean views. The prices are unbeatable, and the drinks are stiff. The food, not so much, but you can’t have everything! Budget secret: If you’re there in the evening, you can also watch a luau from its deck — fo’ FREE.

Honu: YUM. I loved everything at this little spot on the water. From the free roasted chickpeas to the kale salad and Ahi Bolognese, everything was creative and delicious.

Kimo’s: This spot is right on the main strip. It has a lovely open-air bar, but the food was nothing to write home about. Overpriced tourist fare.

Lahaina Pizza Company: Granted, we went here after a pretty hard-core happy hour, but I thought the pizza was really good.

Lappert’s Ice Cream: I don’t remember which flavor I got here, but it was delish. Something with pineapples and mangos… MMMM.

Star Noodle: Excellent Asian fusion spot started by a former contestant on Top Chef (Sheldon).  It’s not on the main drag, so you’ll need a car to get here. They don’t take reservations for groups of less than five, so try to go at an off time. Worth it!

Um, did you not read about how much I love Lahaina Shores?! But in case you’re looking for something different…

Airbnb: There are some cool airbnb spots in and around Lahaina — and many at reasonable rates.

The Lahaina Inn: This is a good budget option right in the middle of downtown. My friends stayed here and loved it.

A big thanks to several of these companies for partnering with me during my stay in Lahaina. All opinions are totes my own.

2 Comments on How to Spend a Week in Paradise