Earlier this year, I spent three glorious months volunteering with La Esperanza Granada in the Central American country of Nicaragua. I loved my experience, and I think that many others would, too. But there’s not a whole lot of information out there about volunteering in Nicaragua, or with this organization. With this post, I’d like to remedy that.

Thinking about volunteering with La Esperanza Granada? Here’s what you need to know.

The other large chunk of volunteers work on the English team, which rotates between two schools. This is a good option for people who don’t speak as much Spanish, or for those who’d like to work with older kids.

All in all, the organization seems eager to accept volunteers and doesn’t seem too rigid about the level of Spanish or time commitment required. Obviously, the longer you can stay, the better, but they’ll still take you if you only have a month to spare.

I worked as a helper in a 1st grade classroom in the mornings, and tutored 3rd graders one-on-one in reading in the afternoons. I enjoyed both immensely. In 1st grade, I was only responsible for around 20 minutes of lead teaching each day. I’d prepare one game or fun activity, which was the perfect amount of responsibility. The rest of my time was spent assisting kids one-on-one and helping the teacher with classroom management.

The exception is if you volunteer during summer school, which is during the months of December and January. If you’re there at this time, then you are the teacher. You’ll be working in a classroom teaching English, math, Spanish, and sports. Though this was overwhelming for those who hadn’t taught before or didn’t speak any Spanish, I enjoyed the autonomy and freedom of running my own classroom and curriculum.

There will be other English-speaking volunteers at your school, though most of the teachers won’t speak any English. To get to school, most either walk or ride bikes. The majority of the schools are about a 40-minute walk or 20-minute bike ride away. It’s a long, sweaty journey there, but you’ll be with other volunteers, and the hugs you receive upon arrival make it all worth it.

They’re incredible. They have next to nothing, but they’re still the funniest, craziest, and most positive little humans I’ve ever been around. Treat them with respect and love, and you’ll receive nothing but that in return.

The ability to speak Spanish will make your experience much better. Though it’s possible to volunteer without knowing much, your interactions with the kids and locals (for them and you) will be much more meaningful if you can partake in real conversations. If your Spanish isn’t up to snuff, head down a week before your commitment starts and take intensive Spanish lessons (~4 hours a day). They’re only $5/hour for one-on-one lessons, so you don’t have any excuses!

Granada is a wonderful city. There are lots of things to do and corners to explore. In addition, there’s always something going on with the volunteers — from trivia nights to picnics to birthday parties. Most of the volunteers were in the age range of 18-22, so I didn’t connect with them all that much, but they’re for the most part very nice and engaging. My biggest activities were volunteering, doing my online work, taking Spanish lessons, going to the gym and the pool, and doing some traveling on the weekends.

The housing provided by the organization is great. There are four houses, all of which are centrally located in downtown Granada. This makes them far from the schools, but close to everything else and each other. The houses vary in size, with most of them having a mix of private and dorm rooms. They come equipped with everything you need, including wifi, kitchenware, furniture, bedding, a washing machine, and a TV. There’s no hot water, but you don’t need it in Granada’s heat. Each house has its charms and downsides, but you’ll probably be happy wherever you end up.

I didn’t prance around in a tube top at night or anything, but I generally felt pretty safe in Granada. If I went more than a few blocks at night, I took a taxi or had a friend walk me home. The only annoyance was the constant hissing and repetitions of “Hola, mami” from the Nicaraguan men. It’s a fact of life here, and in general, it’s harmless. Just annoying as all hell. Still, don’t be surprised if one day I turn around and say, “Do I LOOK like a parseltongue?! NO! I don’t speak snake, so please stop hissing at me.”

I broke down the cost of living in a more detailed way in this post, but here are some examples.

Housing: $46/week (For a private room in volunteer housing.)
Food: $25/week
Beer: $1 (In a bar. Yes.)
Day pass to a private (and beautiful!) hotel pool: $5 ($35 for a month-long volunteer membership)
Gym membership: $12/week or $29/month (This includes access to all of the classes, such as circuit training, kickboxing, latin dance, etc.)
Zumba/Baile Adulto class: $1 (at the non-gringo gym)
Dinner in a restaurant: $3-15 (This totally depends on if you’re going to a Nicaraguan restaurant or a gringo restaurant.)
Spanish lessons: $5/hour (one-on-one)
Taxi ride: 40 cents/person (This is to most places within downtown Granada.)
Bike rental: $40 deposit + $2/week (Through La Esperanza Granada.)

• There’s no cost to volunteer (besides the $20 administrative fee).
• They provide inexpensive and centrally-located housing.
• You can work one-on-one with high-need students
• There are always other volunteers (plus one La Esperanza “ayudante”) at the school.
• You’ll rapidly improve your Spanish, since you’ll be speaking it every day.
• Granada is a wonderful city to live in. There’s plenty to do there and in the surrounding areas. The cost of living is cheap, as are flights from the US.

• The lack of communication between school employees and volunteers can be frustrating at times.
• Some of the volunteers weren’t there for the right reasons.
• It’s really, really hot all the time, everywhere.

Like anything, volunteering with La Esperanza Granada is what you make of it. If you come to school hungover or not at all, you won’t have a very meaningful experience. And if you expect to have your hand held the whole time, then you probably shouldn’t be volunteering in a foreign country. Of course, there’s little things that are annoying about the organization, or times when their approach seems disorganized. But that’s the same with any company or organization — and particularly one that isn’t turning a profit.

With La Esperanza Granada, you’re given a lot of autonomy to create your experience. I enjoyed that, but some might not. It’s important to remember that you’re not going to effect massive change in just a short time. Some of the volunteers came expecting to see huge results in a few weeks, and they became frustrated when they didn’t. I thank Mother Teresa for my thoughts in this regard: “We cannot do great things on this Earth — only small things, with great love.” Just try your hardest to do things with great love while you’re in Granada, and elsewhere. That in and of itself will have an impact.

Did I feel like I made a difference? Yes. Of course, I didn’t save anyone’s lives, but I think the volunteers being there and giving one-on-one attention to the kids has a profound effect on them and their self-esteem. Due to their circumstances, many of them are forced to grow up very fast, and they seem to find someone caring about them, playing with them, and helping them in their classroom struggles pretty cool.

Don’t let me be the judge, however. The smiles and warm welcomes from the students, teachers, and community members led me to believe that they like having us there. And if we weren’t making the kids happy, then they probably wouldn’t be as stoked to see us.

The best part about La Esperanza is that students from the neighborhoods they work in can apply for college scholarships. If they receive them, they must continue to work in the schools as “ayudantes” (helpers). As the organization says, they believe in “giving a hand up, not a hand out.” That’s a positive way to create lasting change.

I LOVED my experience working with La Esperanza Granada. I think it’s a wonderful organization with a well thought-out mission that truly affects the lives of little (and adorable) Nicaraguans. Children’s education is so important, and they do a great job with it. My experience was everything I’d hoped for — I can’t wait to return someday!

What other questions do you have about volunteering with La Esperanza Granada? Please feel free to ask them in the comments, or send me an email!

Even if you’re not interested in giving your time, check out the La Esperanza donation store. There are lots of ways to help the adorable faces you’ve seen here!

Thinking about working while volunteering? Or just working? Here’s the 411 on working remotely in Nicaragua. 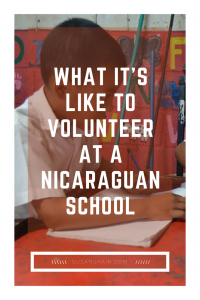